How To Replace the Thermal Paste on Your Apple CPU

Building your own computer or assembling a repaired computer can seem pretty straight forward. This part connects to this part, you feel a reassuring click and you know that it belongs there. It just fits.

But then you come across some goop in a pouch, or maybe it’s in a syringe, and you find yourself thinking “I’m not a trained medical professional. What do I do with this syringe? Where does this part fit?”

We’ve got the answers about what thermal paste is, what is does, and how to apply it.

What is this thermal paste stuff?

Before you learn how to replace your thermal compound (thermal paste), you should take a second to understand what it actually is and the purpose it’s serving. Thermal paste acts as a bridge between the CPU and the heatsink. The CPU and heatsink are already sandwiched together, but microscopic imperfections in their surfaces reduce the efficiency of heat transfer between them.

Why would the thermal paste need to be replaced?

Over time, thermal compound will dry out and begin to develop cracks which interrupt the heat transfer, making it much less effective. If you use your computer frequently and for longer periods of time, this process happens more quickly. An average user who only does some light web surfing can generally go many years without needing the thermal compound replaced, but the thermal paste is always becoming less efficient at pulling heat away from the processor.

For computer components without moving parts, like the CPU, heat is the silent killer. The hotter your computer runs, the shorter the lifespan. So the more efficiently you can draw heat out of the computer chassis, the longer the internal components will last.

The healthy temperature range for a CPU varies quite a bit by processor type, so it’s best to look up the safe range for your particular processor. A number of things could be responsible for a spike in temperature, but if the obvious reasons are not the culprit, thermal paste could be the cause. There are free apps and software available for Mac computers that will track CPU temperature. Smcfancontrol works wonderfully, and it tracks more than just temperatures.

How to replace the thermal paste.

Below is a step-by-step guide detailing our favorite method for replacing thermal paste. The demonstration was performed on a MacBook Air, but the same steps can be applied to most computers.

And of course, a syringe of thermal paste

Buy
Before handling the logic board and other hardware of your machine, we recommend that you're grounded with an antistatic wrist strap and take the necessary steps to keep your device safe from ESD.
After new thermal compound has been applied, it takes several hours of operation for the paste to properly "set" and perform at maximum efficiency. The difference isn't drastic, however, it will be noticeable if you're closely monitoring the CPU's temperature.
The logic board was removed prior to replacing the paste for this example; however on some models, it can be done without removing it at all. If you're unsure whether you can skip the logic board removal on a particular model, ask in the comments below.

Take your screwdriver and carefully remove the screws attaching the heatsink to the CPU. Set the heatsink and screws aside. 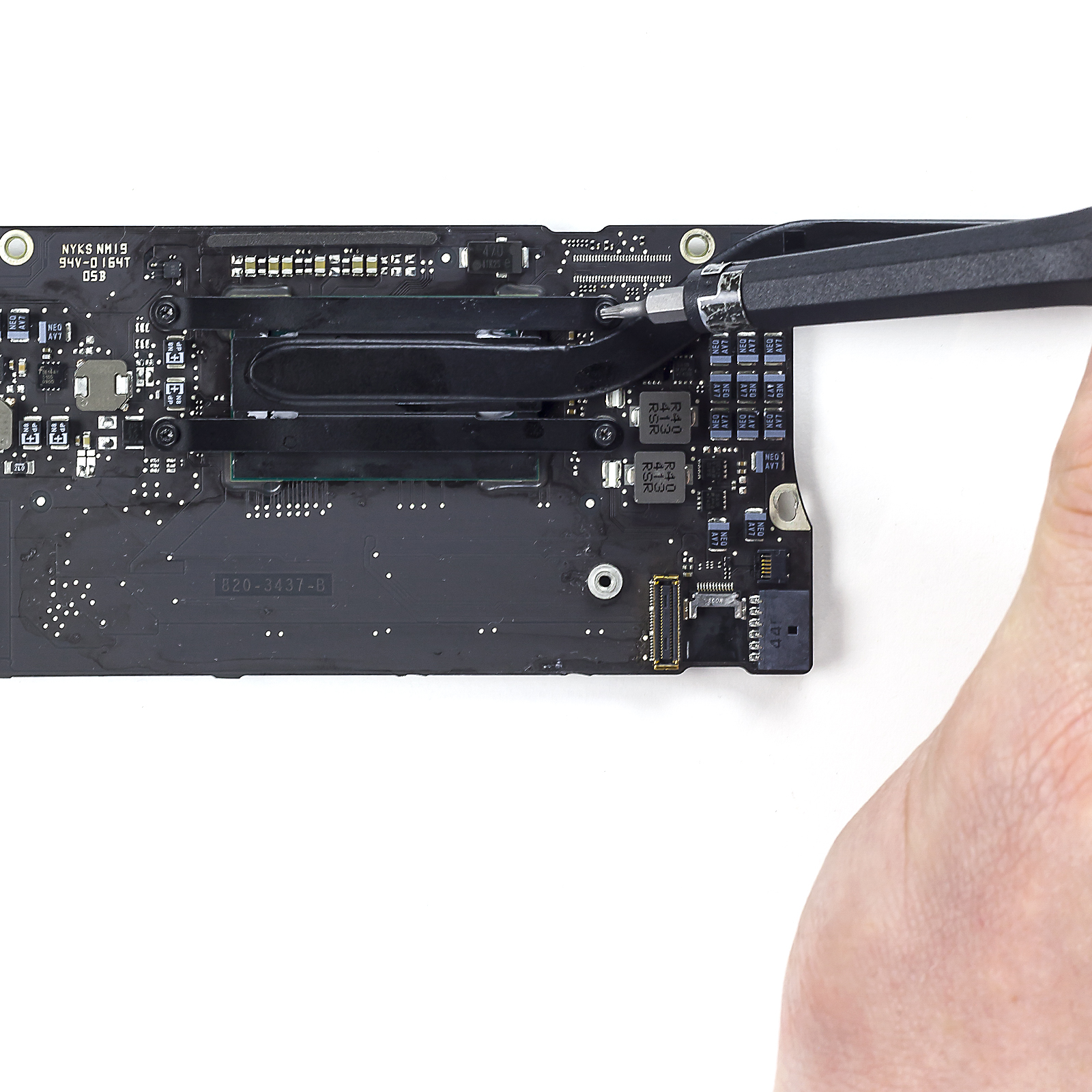 Installing a heatsink is a bit tricker, but just unscrew to remove.

Douse your Q-tip in rubbing alcohol (90% or higher) to prepare for removing the old paste from the CPU and the bottom of the heatsink. 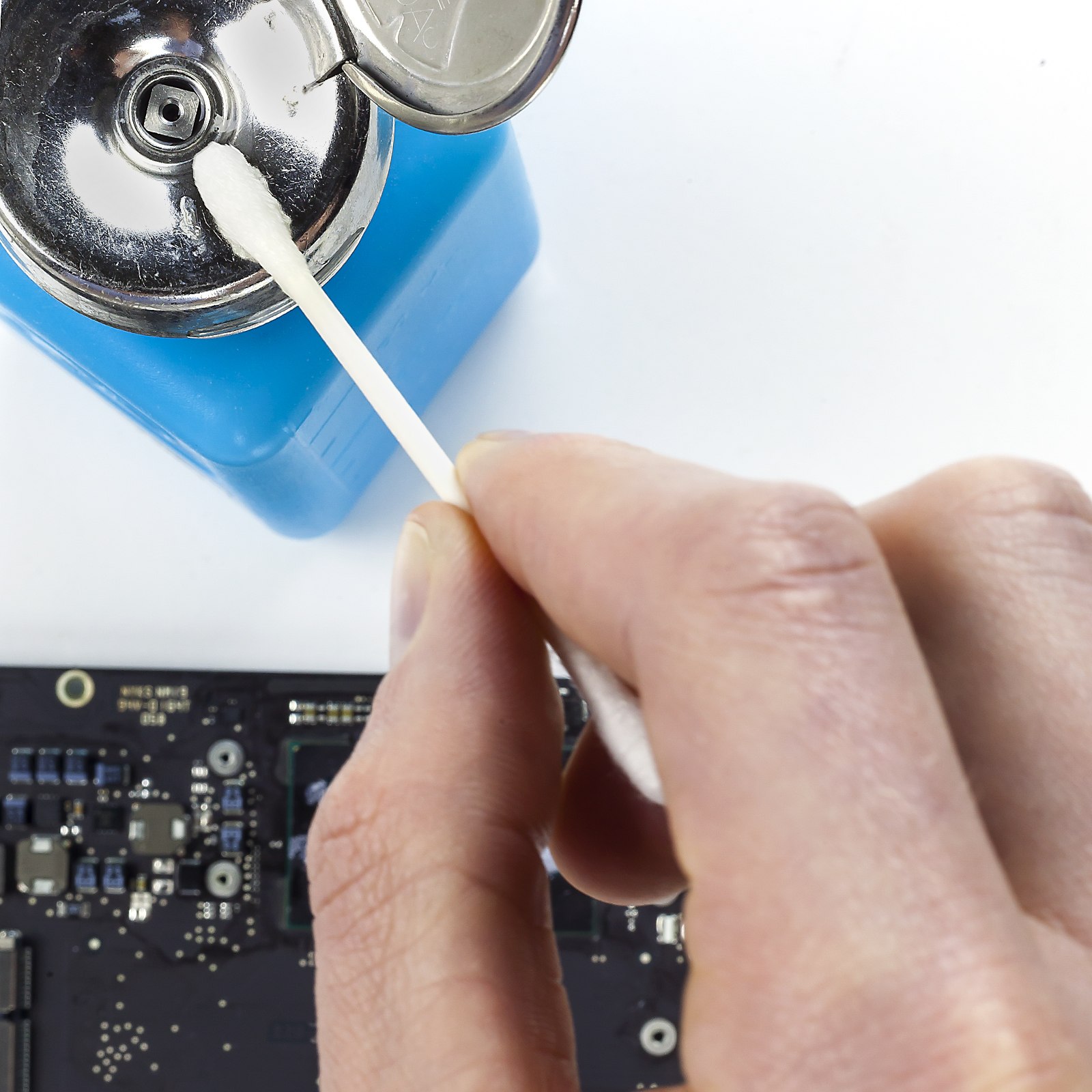 Maybe you have a cool alcohol dispenser like we do? If not, you'll still manage.

Remove ALL the thermal paste with the Q-tip, leaving nothing behind. Wipe the small fibers/hairs off with a lint-free cloth or coffee filter. 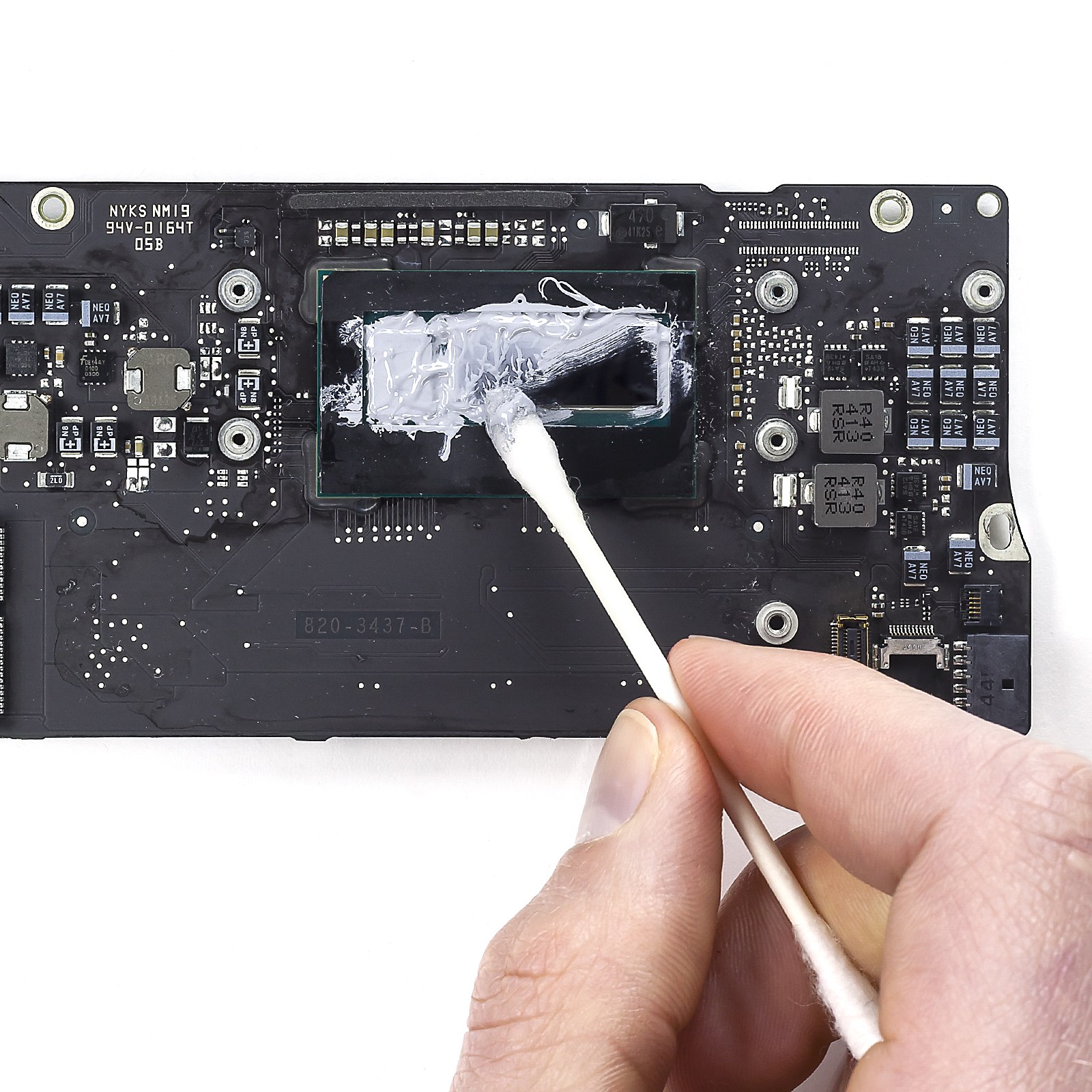 You’re almost ready to start applying the thermal paste! By now, your CPU and heatsink should look something like this: 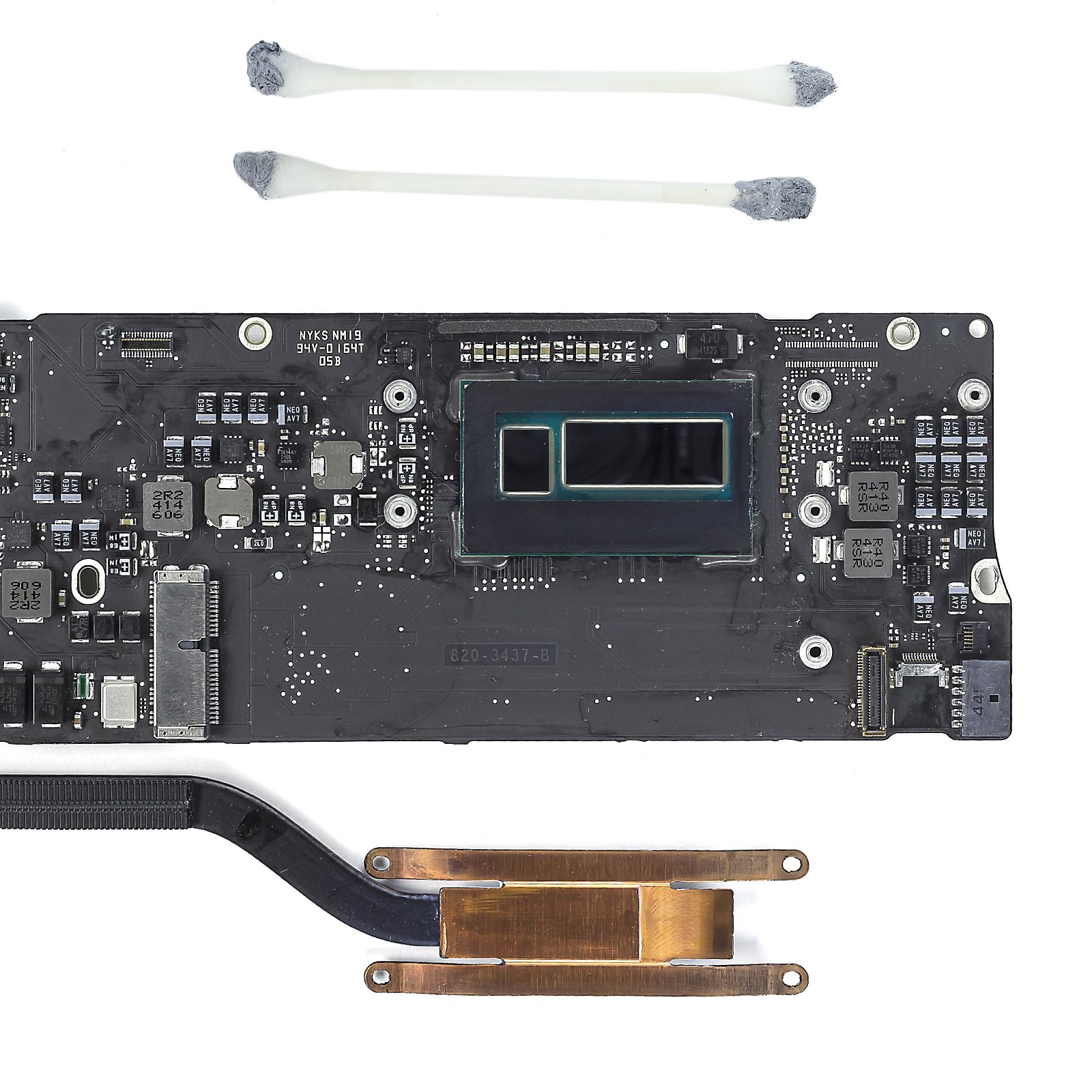 Apply a small amount of paste directly to the surface where the heatsink will rest. Be careful not to apply too much. Thermal paste is generally non-conductive, but there’s no need to make a mess all over your board. 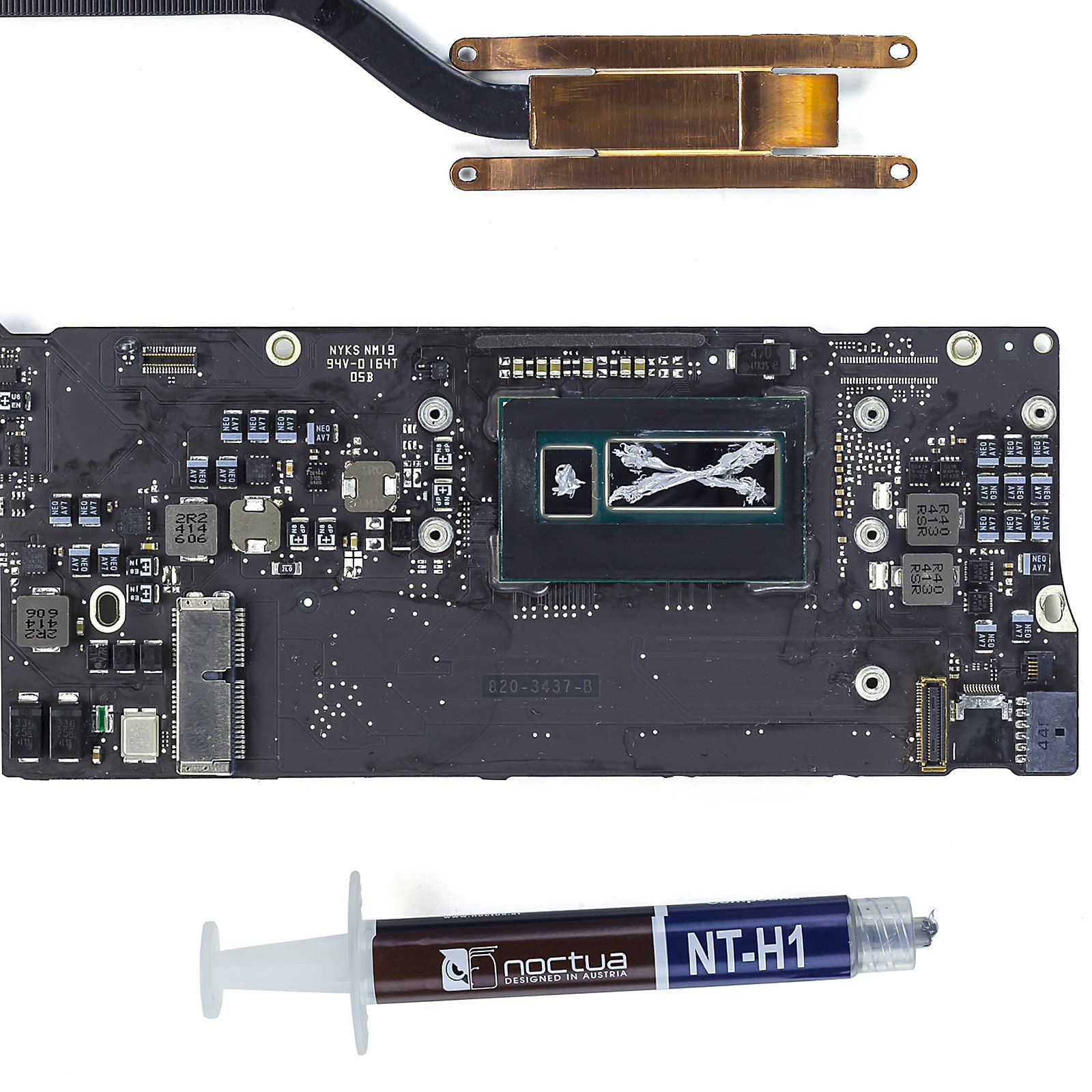 Gently place the heatsink directly on top of the CPU where it was first attached. If any thermal paste comes out the sides, then too much was applied. In this case, carefully wipe excess paste up with another coffee filter until none remains on your board. 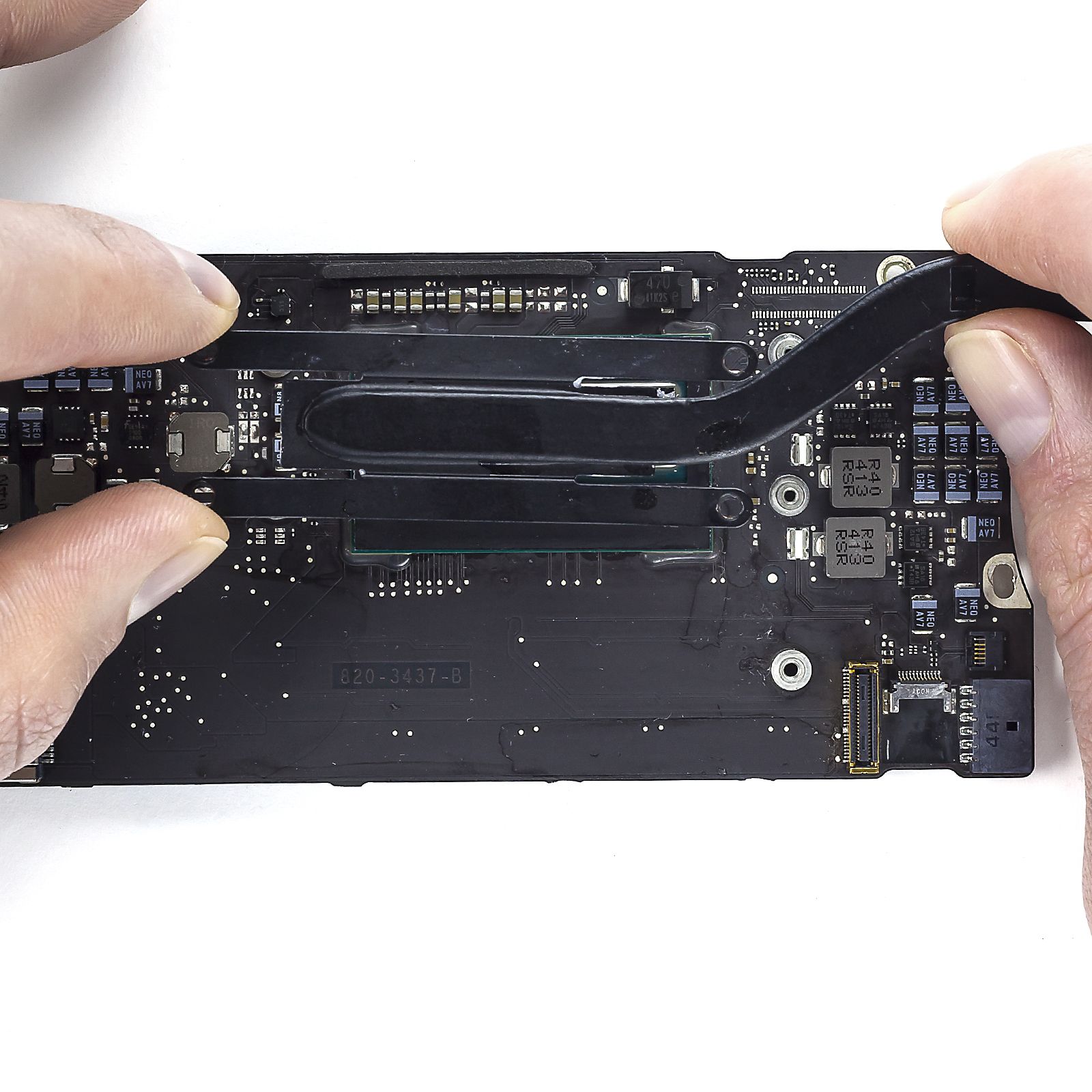 After the heatsink and CPU are reunited, it is crucial not to pull them apart or the seal will be compromised. If this happens, air pockets will have likely formed between the processor and heatsink and the previous steps will need to be performed again.

Now just screw everything back together in the proper order and you are finished!

We strongly recommend screwing the heat sink back on in a star-like pattern to ensure pressure is evenly distributed as the heatsink is tightened into place.
Be sure to use caution while tightening the screws to avoid stripping one. If it's already too late, check out our post about combating stripped screws.

Whether the board you are operating on looks like the one in the steps shown above or not, the process is pretty similar.

Here are a few different examples of boards with a red outline highlighting the area where thermal paste should be applied:

Think you know a better way? Let us know in the comments!

When you reseat the heat sink do you move it around slightly to spread the thermal paste or does it happen naturally?

Whats the black tape like thing around the cpu? Mine got removed while doing this. Where can I get a replacement?

You could add / use a full ESD mat and strap / Place PC and any related boards (If removed) on mat (ESD damage can take years to show up!)